View the video above to see why a reference is made to Rev: Jean Darnall. This was the lady who taught Anton much about the Holy Ghost. Do watch this video of Anton speaking on YouTube showing exactly what was prophetically and strategically shared about The Holy Ghost at the gathering in Kuala Lumpur, Malaysia. View why he received their rapt attention. A portion of the 2010 prophetic word is cited within the video.

If you have a few minutes to spare, please do listen to the anointed hymn above- it will comfort and bring solace to your grieving heart. It's a promise. Go for it, put us to the test and view it!

On 7th of July 2002 we received a phone call that my dear brother Justin Nicholas had fallen unconscious in his home near his bedside.This was in Gloucester, which is on the western side of England, approximately 120 miles from London.

Our family members from Malaysia and Canada were informed that the situation was very critical and some flew here at short notice from these countries.

Our own family rushed from London to Gloucester and arrived there at 1am.

My sister and her husband also came in from London and arrived on and around the same time too.


The medical staff were informed not to disconnect the life support system until we had arrived there. At 2am the Doctors told us personally that his prognosis was very poor. CT scans showed that he had had a massive brain haemorrhage (they were unaware of the extent of brain damage) and that it was a waste of time to send him to the specialist Frenchay Hospital in Bristol for brain surgery. After receiving the dismal doctors' report, we went into his room in the Intensive Care ward and than it suddenly hit us that my brother was dying. There was a Filipino nurse there who left us to be with him on our own.

A sad thought possessed us which took a long time to shake off - that my brother Justin during the small hours of the morning could have died with no family members present to hold his hands while he was dying. As a comfort and to speak words from the bible reassuring him constantly that he was not alone and that Jesus, our Redeemer and Saviour was present.Compassion and mercy demands that you console the loved one who is dying. It's comfort through association.

( There is a prompting from Our Lord to place this on record of an earlier incident, to say a mighty thank you to our close friend Valerie Meilton. For on 15th October 2001, after receiving the urgent news from us about my brother Justin who had fallen unconscious at Terminal 3 in Heathrow Airport and was rushed by ambulance to the nearest hospital.

She dropped all her plans at a moments notice. She rushed by Taxi from Cippenham near Windsor to Hillingdon Hospital, in Uxbridge, Middlesex to assist and support Justin in the Accident & Emergency Department. She stayed all night from 12 midnight till 8-30 am. Once he was stable, she graciously proceeded on to her work place at a Hospice near Ealing, London. To read a further profile regarding Valerie Meilton please click here, the story will bless you!)

At the Intensive Care Ward in Gloucester we decided to engage in intense & vibrant spiritual warfare. We declared to Justin the Lord's report, armed with the weapons of warfare, overflowing prayer and the Word of our testimony; that Jesus Christ is the only Deliverer and Healer.

We spoke aloud about the healing effects of the Precious Blood of Jesus Christ of Nazareth. With conviction we decided to combat the enemy forces. We challenged the angel of death in the Name of Jesus Christ of Nazareth, proclaimed the Lordship of Jesus over his life and we anointed him with oil. We saw life coming back to him the next day. We witnessed a Living God manifesting His Presence by showing forth a miracle on my brother Justin. Glory be to God!

We also have been informed that loads of people prayed for Justin including his Pastor, church members, relatives and friends from Youth With A Mission. Various people had distinct prophecies, verses from scripture, positive pictures, prayed in the Holy Spirit, words of knowledge, encouragement and comfort that Justin will be healed and delivered from the death bed, some even fasted and prayed.To all these people we say, Thank You. 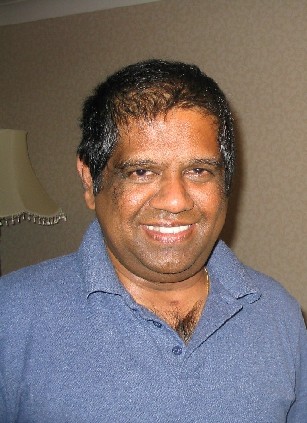 This is a recent photograph of Justin, taken in December 2003. Praise be to God for raising him up from a position of hopelessnes.

Luke 18v1: One day Jesus told his disciples a story to illustrate their need for constant prayer and to show them that they must keep praying until the answer comes.

Capture what happened when our Lord Jesus appeared to Anton in a 3 dimensional Prophetic vision at a Prayer Centre near the Pyrénées mountains in France, July 1979. It was a Divine instruction that had to be fulfilled and obeyed to the last dot. Every scene in the vision came to pass and was fulfilled on 23rd April 1983. Familiarize yourself with what one has got to go through to be steadfastly obedient to a vision... For clarification do press : This link: It might surprise you once you start reading it. 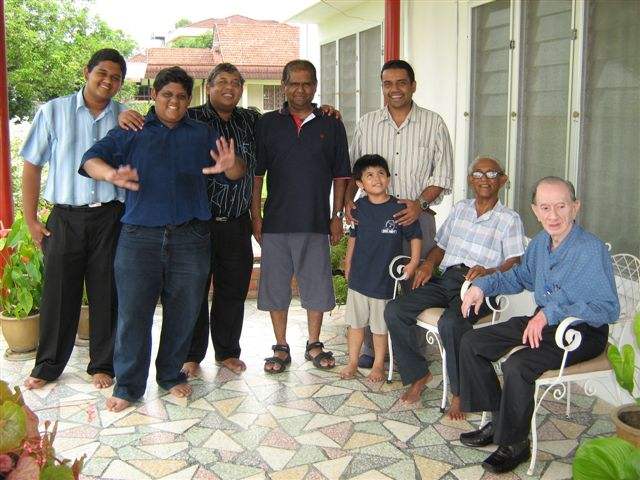 Photograph taken at Uncle Cyril Rajendram Nicholas's home, my Dad's brother. My Dad is sitting on the far right. This is the latest photograph of Justin, 2008. Justin is in the middle of the photo, standing fourth from the left.( His health proclaims a miracle). Photographed standing on the extreme left is Dr Shaun Nicholas, followed by Jared Nicholas, (the grandchildren of Cyril Nicholas). The next in line is their father Dr. Eugene Nicholas, (the youngest son of Cyril). The family of the late Dr. Eugene Nicholas reside in Malacca, in the southern part of Malaysia.

My brother Fintan is standing on the extreme right with his arms around his son Luke. This photo was taken in the State of Negri Sembilan, Malaysia.

Both my Dad Albert Nicholas and our Uncle Cyril Nicholas were Directors of The Oriental Bank of Malaya Ltd. Read more here.

Story of the Oriental Bank of Malaya Limited.
Bastianpillai Paul Nicholas
who was blessed with an astonishingly acute foresight.

An all consuming, passionate entrepreneur driven by a strategic vision, who single - handed brought an idea to pass, overcoming obdurate hurdles and colonial prepotency.

Originally B. P. Nicholas along with a close friend between the years of 1918 -1920 commenced his first financial business providing financial services in Ipoh, Perak. This led to the establishment in 1920 of B. P. Nicholas and Sons, whose Head Office was at No 2 Foch Avenue Kuala Lumpur. In 1936 Colonial License was obtained under the title of Bank of Malaya Ltd. 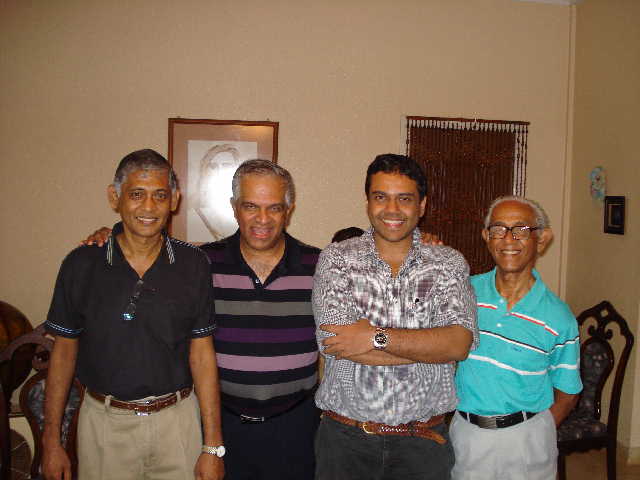 Above photograph was taken in September 2009. On the far left is Edmond Nicholas, the 2nd son of Uncle Cyril. Next to him is Anton, with his brother Fintan. We had the opportunity to meet Edmond's wife Sally for the first time. We did pray together.

We want to acknowledge our Lord's blessings on this website. It was blessed and inaugurated officially on 1 August 2002.

The counter below was introduced for the first time on 8th January 2014. Sadly the firm who installed my previous beautiful counter many years ago,and filled it with exciting statistics,suddenly went out of business.As a result we lost all our treasured statistics.

We like national flags portraying on our website so we are re-introducing the flag counter freshly again through another firm.It is so exciting to see visitors coming from the far corners of the earth! Commenced 8th January 2014. 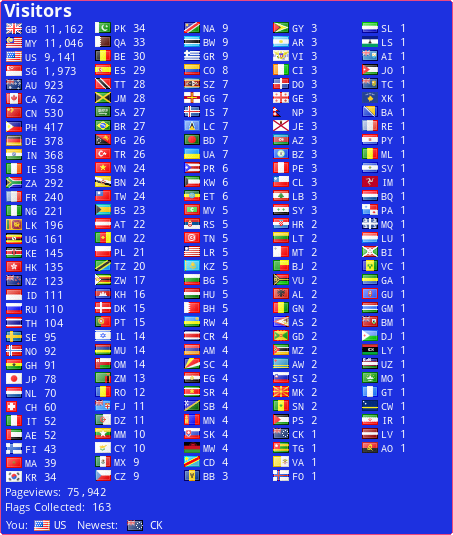 View our pictures on the home page

We need to plant here without any optional caveats the challenging words of A. W. Tozer, “It is doubtful that God can use anyone greatly until He has hurt him deeply".

So read what the Nicholas family had to persevere through. It will make a fascinating read. 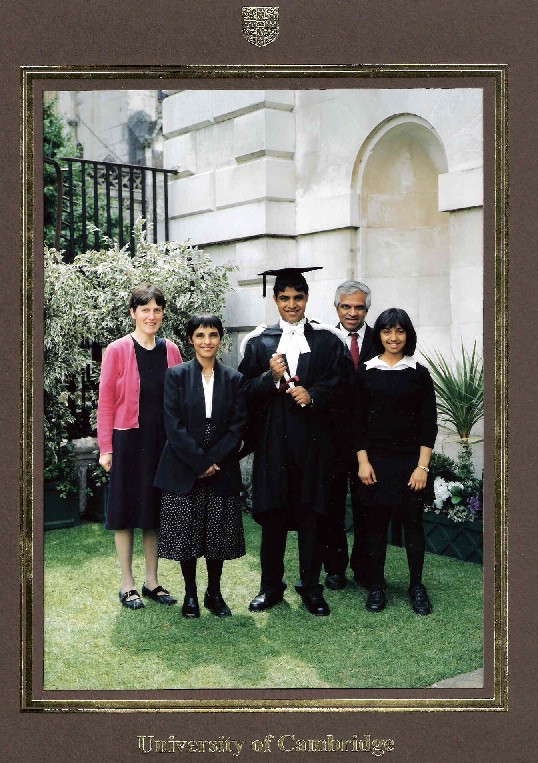 Paul graduated with an Honours Degree in his Mathematics tripos from Christ's College, University of Cambridge, 1st July 2005. Paul is pictured with his parents, his sister Jannine and our adopted family member Valerie who is positioned on the extreme left.

Paul attained  his MSc from Imperial College, London. He was also awarded a distinction (a first) for his MSc.

The further exciting news is that our daughter Jannine has been given a conditional offer at St. John's College, Cambridge, to read for a BA Honours degree in Law commencing October 2009. One of the reasons she opted for this College was to follow in the footsteps of her grand Uncle Benedict Ponniah , who was rightly positioned to become the Secretary General of the United Nations. A Queens Scholar, in the same prime league as the renowned Seniors Mr & Mrs Lee Kuan Yew (the first Prime Minister of modern Singapore). The conditions are steep for Jannine she needs to get a minimum mark of 90% for her A level subjects. 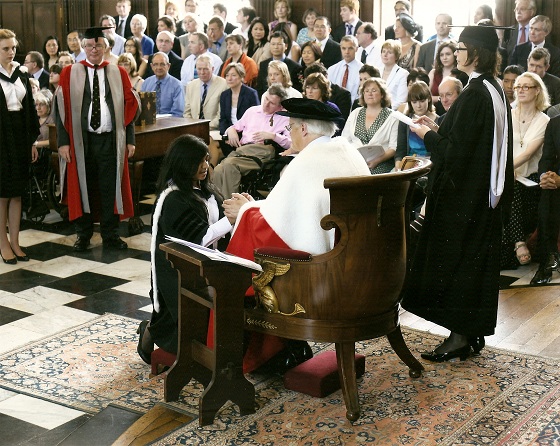 Photo of Jannine Nicholas being admitted to her BA (Hons) degree in Law in her graduation ceremony at the Senate House, University of Cambridge on 28th June 2012.
This photo shows Jannine kneeling before the Master of St John’s College, Professor C.M. Dobson, whilst he says these words:

"By the authority committed to me, I admit you to the degree of Bachelor of Arts in the name of the Father and of the Son and of the Holy Spirit." 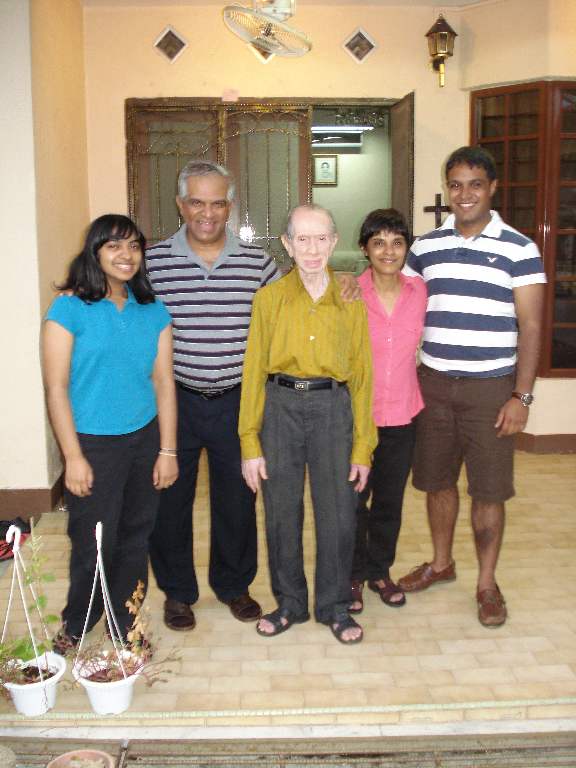 My Dad is positioned in the centre of this photograph. You wil observe that a photograph of my late Mum can be seen in the background.It was my father's Dad, Bastianpillai Paul Nicholas between the years of 1918 -1920, who commenced his first monetary business providing financial services in Ipoh, Perak.Malaya. Due to the date references he is recognised as one of the first Asian bankers in the history of British Colonial Malaya. Please read more here :Press Link-